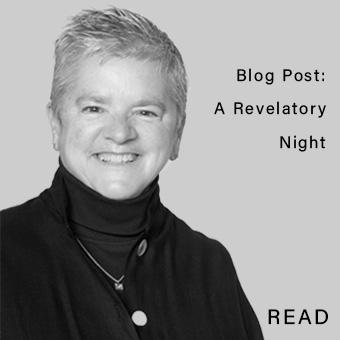 When Laura was dying, she often had moments of deep clarity in the middle of the night. Sometimes she would wake me up during the night or I’d hear about something amazing in the morning when she would awake.

Two weeks before she died, I woke up in the futon bed next to her hospital bed in our home. She was lying still with her back to me, so I didn’t know if she was sleeping. I softly whispered, “Are you awake?” She responded with great enthusiasm, “Yes, I am!” I was shocked as full sentences were not usually part of her early mornings at this stage. “How was your night?” I asked. She replied, “I had a revelatory night! Let’s have coffee on the deck and I will tell you all about it.”

Laura hadn’t moved from her hospital bed in a while, but I excitedly got out of bed at the possibility of a full conversation with her. The metastases to her brain in the last few months of her life had impacted her ability to be in conversation. I helped get her into her wheelchair and wheeled her to the lakeside door. I picked her up and got her down the three stairs outside, into her Adirondack chair on the deck and then I ran into the house to get her a coffee. It was a drink she hadn’t had in a while, and I had great doubt that she would be able to consume. I brought it out and she took a tiny sip. I waited. She held it out to me and said, “It needs a shot of something!” “Really? Like whiskey or something?” “Yes,” she responded. Amazing.

I went back into the house and put a few drops of Tullamore Dew in her coffee. I brought it out and she took a satisfied sip stating, “Oh, this is a Jim and Susan coffee” - two friends of ours who had joined us months earlier drinking Irish coffees in this exact location on the deck.

Laura looked up and asked, “But where’s your coffee?” I scrambled inside to get mine before Laura lost the lucidity of this incredible moment. I rushed to the deck, settling into my chair, and said, “Okay, I’m ready. Tell me about your revelatory night.”

Here is what she said:

I was so relieved to hear these words as she had been struggling with feeling ready to die but not being able to do anything about it. Lenzie (her tai chi teacher) and Ruth (her tai chi friend) had been deep supports to Laura over this time, so I wasn’t surprised to hear their names.

I softly asked, “What is my job, Laura? What can I do?” She paused for quite a while, and I wondered if her lucidity was dropping away, when she looked directly at me and with the strongest voice I had heard in quite a while said,

“Do everything you never dreamed possible because you took on so much responsibility your whole life. Fuck it. Don’t do anything you don’t want to do for the rest of your life. Just the dreams, especially the ones you don’t think are even possible.”

I looked at her, as tears started streaming down my face, and I responded, “I promise, Laura. I promise.”

Can there be a bigger promise than that? I don’t know. But at the start of this year, I have been wondering about Dreams We Never Held As Possible. The impossible ones. The ones that barely enter our consciousness because they are completely out of the realm of what we hold as possible, probable, or the unknown ones we don’t have a clue about until they emerge and kick down our doors.

I am starting to think these impossible ones don’t appear as possible because of the amount of disruption they would cause in our lives. In our attempt at stable and orderly existences, especially when the world seems crazy or fast or just plain hard, impossible dreams may seem out of our reach. And if touched at all, they will massively impact everything, make things crazier, faster, or just plain harder. At least for a while. The bigger the dream, the bigger the disruption. No wonder we back away. When you work with clients, are you building their disruption coping muscles too? Are you asking your client, “What will this dream disrupt?” Even if their coaching topic is smaller, like, for example, “My goal is to communicate with less force,” do you ask your client,

Can you see how even a small coaching topic creates massive disruption? If you are an Integral Coach™, go back and review each item on the list and ask yourself, “How would I build a client’s ability to be with each of these disruptions? What are the needed muscles?”

Each one of the disruption spaces listed above is huge all on its own. And, you have not even gone after the Impossible Dream topic yet. Which disruption capability would you tackle first and how?

Building capacity to be with the disruption caused by the changes associated with any coaching topic, any hope (small or large), or any impossible dream is critical. Consider the following coaching topics:

These are disruptions that shut us down from pursuing big and large hopes and dreams. We start weighing the dream against the disruption. The disruption we can clearly see as often we can articulate the fear and the costs involved. The dream we cannot yet feel, taste, or know in all its fullness. It is not a fair weighing. Instead of placing these two against each other, can we see them as part of the whole? Can we ask, “What capacities do I need to build to support disruption?”

Articulating the specific disruptions and then sorting out what needs to be resident in my body (somatic capacities), my mind (cognitive abilities), my heart (emotional resilience), and my relationships (sense of self and interpersonal skills) to support my ability to be with the disruption that my dream will create in my life. It may seem counter-intuitive to build capacities to be with disruption, but it is feared disruption that can kill hopes and dreams.

It’s not just our dreams that create disruptions, the flip can also occur. Sometimes it is a devastating event that happens first.

The love of your life dies. It massively shakes up your life. You find out, rather abruptly, what capacities you have and don’t have that can help you deal with profound loss. The grief is huge and your functioning declines for months and months and months. Sometimes, in the period of time leading to death, there is no time to build new capacities to carry you through the deep disruption that follows the dying. Either the person dies suddenly and there is no early warning for the disruption that annihilates life as you know it. Or you are taking care of your wife with all your capacities already at full throttle or beyond full throttle and there is no thought to building new muscles that will help you survive the rapidly approaching crash that you know is coming. You are using every last ounce of energy to just get through the dying.

When the full catastrophe occurs, you struggle to put one foot in front of the other, shower, maybe eat, sleep, or deal with the onset of insomnia, you don’t leave the house, or you dread being in the house where she died. And you have no fucking idea what it will take to survive.

Dying of Cancer is the exact opposite of an Impossible Dream. It is an Impossible Loss. But the size of the disruption can feel the same. Dream or Death. In Zen practice, we would say, “no different.”

New capacities are required at either end of the funnel – some needed new muscles are forced upon us. Many widows, widowers, parents who have had their children die have found that they can handle anything afterwards because the “worst thing” has already happened, and they are managing to survive. After a time, you can start feeling that surviving a massive loss or surviving the disruptions created from going after a new dream can feel the same. Both overwhelming with commensurately sized disruption spaces taking up all the energy available to move forward.

Let’s face it. Impossible dreams are hard. Massive loss is hard. Disruption is hard. All three can stop us in our tracks. Or sometimes we get to see what we can survive and then the sky is the limit. It is a strange trajectory. Pain and hope co-arising.

So, why not prepare for it? Can you start building your personal, intimate, known-only-to-you new muscles that will support you in any disruption?

What stops you in your tracks? Can you prepare for these?

What is it? What are the people or places or parts of yourself that you most don’t want to disrupt? Start there. What is preventing your Impossible Dream? Because the problem has never been your dreams, darling.

I want to wish you a good, solid, disruptive, capacity building year ahead. May you bring disruption in close. May you get intimate with it. May it never shut you down.

I also want to say thank you for all the love, care, and skilful support you have given me over these months since Laura died. Today - January 12 - marks exactly five months since she breathed her last breath. Your words and actions have deeply contributed to my ability to be with the most massive loss and ongoing life disruption I have ever known. May you also benefit from Laura’s Revelatory Night and go after the things you never held as possible for yourself, disruptions and all.

My promise to Laura: I will be doing the same.